At our gaming club we are now playing our first games of Bolt action and we're having a blast. In my first game my British army faced the German Heer in a game of maximum attrition (750 points).


Since we've been a Fantasy/40K/FOW club up until now we don't have a lot of scenery yet to split between our Bolt Action tables but I think for a first game this was a nice table set up. Some open areas, some light and heavy cover en the church for lign of sight blocking.


My right flank. 2 British rifle sections and a Medium Mortar. The Mortar's spotter is further up the field to pick targets. the rifle section will advance towards the church knowing the Germans are waiting for them there.


In the middle my Daimler Armoured car has advanced ahead of  another rifle section, MMG unit covering the middle and a medic taking cover in a ruined building.


On my left another rifle section and a Cromwell cruiser tank. Not much cover here so I hope my tank will reap havoc and my rifles can advance carelessly.
Of course a sniper should always take position in a tower should the table provide such lovely scenery.
German right flank, Sturmpioniere, medium mortar and rifle section.

German center and left flank. hiding the Anti tank rifle, 2nd lt., Forward Air Observer, Medic, Light Howitzer and another rife section. The 222 scout car is already behind the church.
The Daimler and 222 went on to chase each other for the entire game without doing anything. Daimler hit twice but both rolls result...a 1 :o(


Rifle section moves up but will be targeted by the light Howitzer downing half the men. After that they fail close combat against a two men sniper team...
German rifle section assault the British that moved into the church. Brits come out victorious.


The end of battle sees the British victorious in the maximum artrition game. (score 8-4)

All clear...push on!
So in the end I won this game of attrition, it was good fun. Even though this was our first game we didn't make too many mistakes. The Bolt Action rules are easy to follow. I'm already looking forward to my next game (which will probably be at a tournament next month...)

For everyone who hasn't thought of the obvious way to paint British camo like on the warlord box art here's a quick and dirty tutorial.
Undercoat your model in black and add those nifty small stickers from your office supplies and spray/airbrush/light brush over with green color. 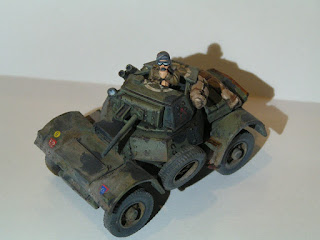 Then paint up your shading, high lighting and details and your done. looks nice with a matt finish and some pigments.


Here's a step by step guide.

Here are some pictures of my British Support weapon teams. A Vickers Machine Gun Nest and a Mortar team. I had some Green Stuff to spare so I made a lot of sandbags.


The MMG is handy for covering zones of the gaming table. Their fire arc must be placed to I can cover as much ground as possible. I will use mine to lock down choke points or a table edge when I expect my opponent to try and outflank me bring in his troops from the sides. 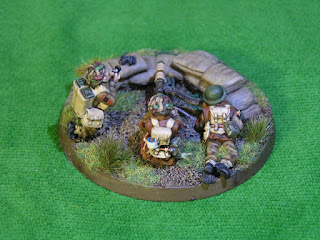 In bolt action the rules for mortars are a bit wonky in my opinion. You can only hit on a six and lower the score needed to hit by one each round, that is if your target hasn't moved. If you miss no scatter or anything...you just missed. 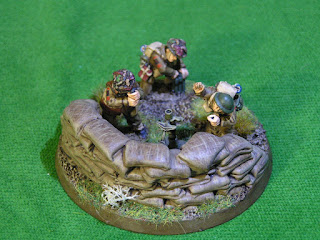 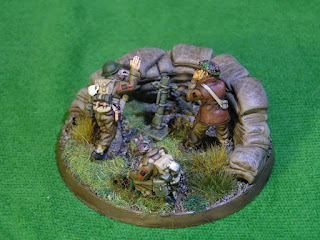 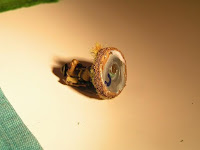 Step 1: glue model on it's plastic base.
Step 2: glue model's base on a metal washer (mine are 2,5mm thick)
Step 3: put a little ball of greenstuff in the center hole of the washer...
step 4: put little drop of super glue on the greenstuff
Step 5: press a 2x5mm rare earth magnet in the ball of greenstuf
Step 6: Press down model on flat surface. the magnet sinks in the greenstuff and is level with the surface.
Step 7: put it away for a few hours to set and cure.
(for metal models I use 2 magnets)


Pro's:
-Plastic models carry a bit more weight and are nicer to handle
-Models stay upright and don't tip over due to the weight and low point of gravity.
-You can put them on a metal tray and they will never fall of, this is especially handy at tournaments because you just put them on a tray and don't have to worry about bumping into anyone and that you models fall on the floor. (see picture) 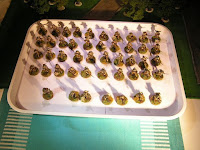 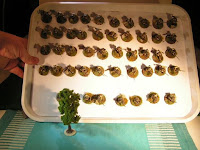 Pictures:
In the last picture you can see I hold the tray at a near 90 degree angle. (tray with metal sheet but a metal tray works even better) I can flip the tray over 180 degrees and the models still stick. Even metal figures like the heavy British para medic at the left front. (2models on 1 base)
Posted by BaBuGames at 1/12/2014 10:48:00 am No comments:

I finished my spotter, the 2nd LT and his "plus one". The piper is suppose to be a commando (I have those too) but I wanted to use him supporting the 2nd LT in my British Regulars army. sorry pictures taken with my Iphone but will take some better ones when I finish my mortar pit and MMG squad. 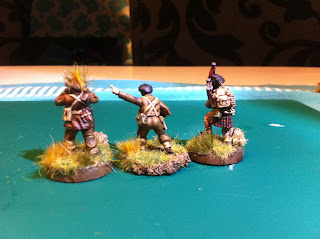