For a christmas special at my gaming club we all put one of our models in a hat and drew one each to paint up for eachother. The funny thing was we didn't know who contributed which model and we had to keep it a secret untill our anual mega battle in December(more about that later...). We would then all put the model we painted on the table to have a look at eachothers work and take our own respective models back home. 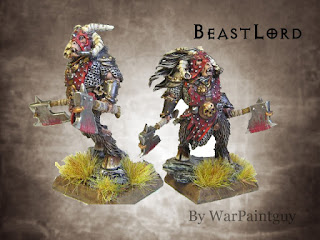 I drew this great model. The beastmen army general, a Beastlord! I never painted any goats so it was a challenge but I was very pleased with the result. I always seem to paint better when I paint for someone else, or at least that's what I think. It was great to see all the painted models on the table and the IG Kommisar I put in turned out great as well. I don't play IG nor do I still collect them but it is a great model to paint.

The guy I painted this angry goat for was very pleased with my efforts. He hadn't played with his beastmen army for a while but now he will start playing again and he's even bought new units to expand his already impressive army. I couldn't get a greater honour then that.

The paintjob itself just took about 4 hours because the models was already undercoated. I did give it a new base as the model wasn't based at all. It was fun to paint and not too complicated but I'm not a fan of the beastmen myself so it will probably be a one off unless I get a commission order in to do a beastmen unit/army.

Here's the Step by Step guide on how to paint battle damage.

I picked an assault marine because I gave it a yellow powerfist and it’s easier to take clear pictures of that rather then of the catachan green I use a lot on my chapter.
These are the colors I used:

Step 1. Basepainting
This is what I call Basepainting, I paint the model in the basic colors of my chapter. If you take your time you can paint up the model nice and smooth. Make sure your paint is watered down a bit because it paints nicer and easier and looks a lot better. No one likes a lumpy model unless its nurgle.
The base colors I use are
Fingers and arm: Catachan green
Hand : Sunburst yellow
Skull: Tinbitz
Hose: Fortress Grey
We will just concentrate on the powerfist so I only describe what I do Step by Step on that leaving out the rest of the model. 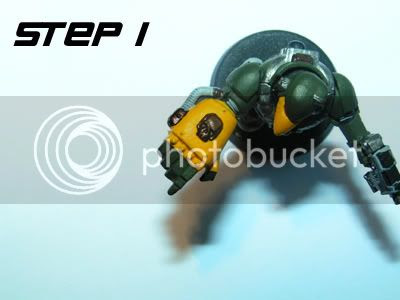 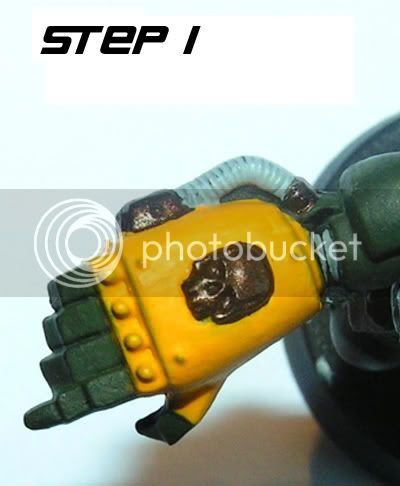 Step 2. Edging
When you want to give your model a bit of depth the easiest way to do so is by edging it. Just paint really fine lines along the edges in a lighter color then the original base color.
I used:
Fingers: Camo green
Hand: Sunburst yellow
Skull and hoseconnectors Shining gold
Thin down your paints again and lightly edge the model. The skull was done with very watered down shining gold on the raised parts only. 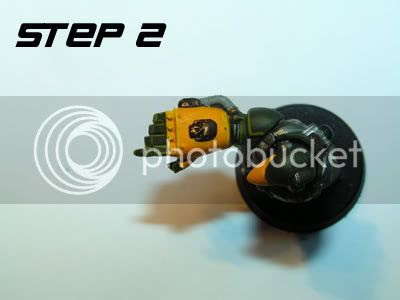 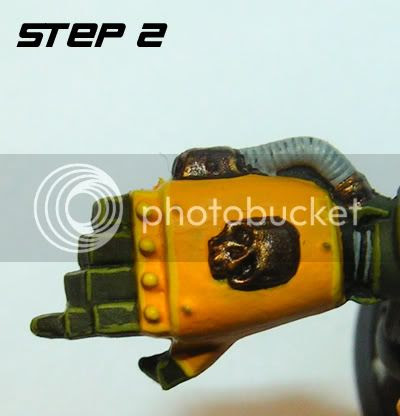 Step 3. Washing
Next I washed the complete Powerfist with watered down badab black (1:1) . This will give the model even more depth and creates the illusion of shadow. There’s nothing to it, just wash it and make sure it doesn’t pool. Don’t over do it and you’re good. 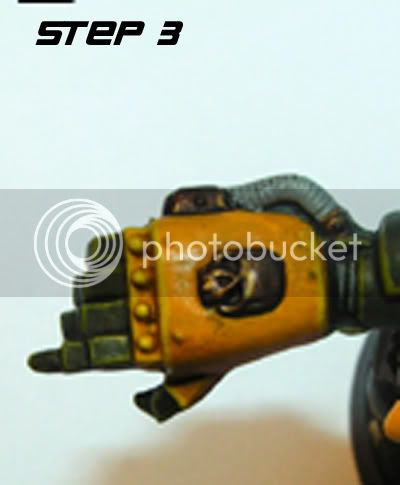 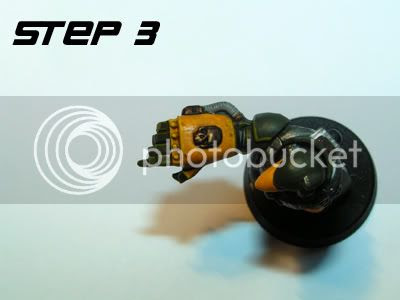 Step 4. first scratch layer
Now we are getting to do some battle damage! The first layer that is… I used sunburst yellow to make the first scratches. This color is lighter then the washed golden yellow on the rest of the powerfist so it will stick out a bit. We are creating the look of the Powerfist very light scratches as if only the very top layer of paint has come off as a result of battle damage. You now have to imagine where you want your battle damage to appear. Again around the edges and raised areas is a good idea because that’s where the chips of paint come off the easiest. Because this is a Powerfist its not hard to imagine where the fist will be most scratched when punching down xenos. I made some small narrow strokes along the line of movement of the fist as this looks the most realistic. Also a few small scratches on the middle of the hand. This will become more clear in the next few steps. 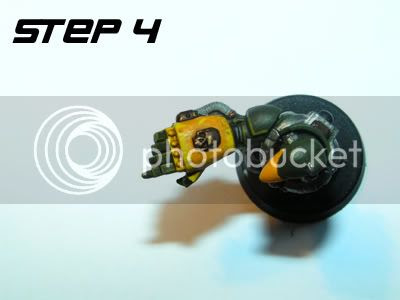 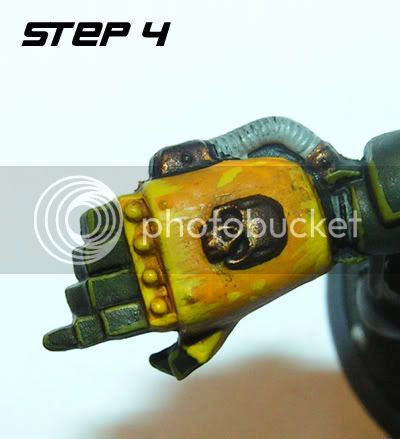 Step 5. Second scratch layer.
This step is basically the same as the last step but now we’ll use chaos black and stay within the area that we just painted with sunburst yellow. Leaving just a fine line of sunburst yellow showing it will create the illusion that this layer is scratched deeper then the last step. As if the model is scratched to the basecoat of the model. The pictures should make this step more clear. 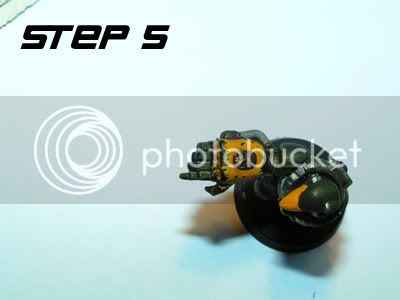 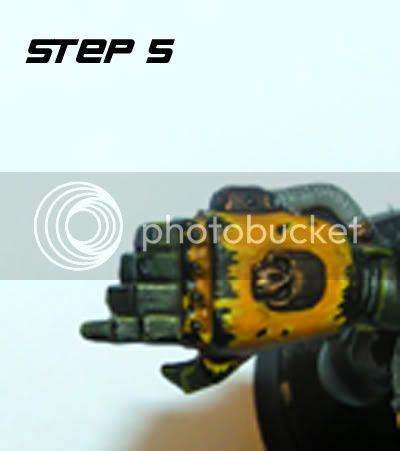 Step 6. Last scratch layer.
It begins to feel like rinse and repeat but this is the step that brings it all together. When you take boltgun metal and do the same as step 4 and step 5, leaving a fine line of the chaos black showing it will seem as if this is the deepest part of the scratch. I also touched up the skull with some burnished gold. Look at the picture of step 6 and it should be clear what I mean here. 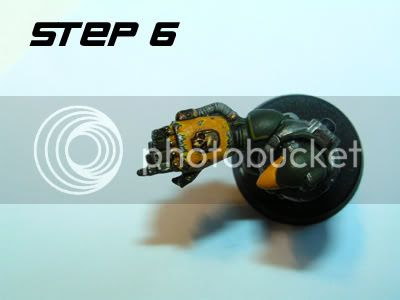 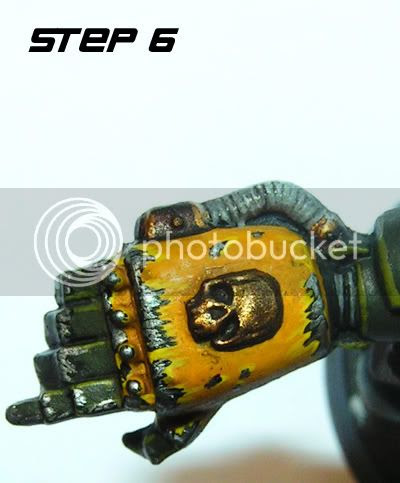 Step 7. Touching up
In the last step I use mithril silver to do some touch ups. I only put very tiny painttips in some places to make it seem these scratches are fresh or recent or that they are scratched more often over and over again. Again it also gives a bit more depth.
I also touched up the skull with a 1:1 mix of mithril silver and burnished gold.
Done!
The result looks quite satisfying to me so I’ll leave it as it is. You might want to experiment with adding a step or two yourself. I sometimes do a layer of very very watered down wash between step 6 and 7. 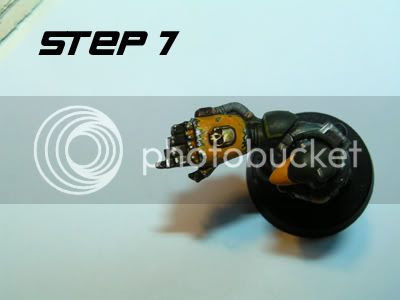 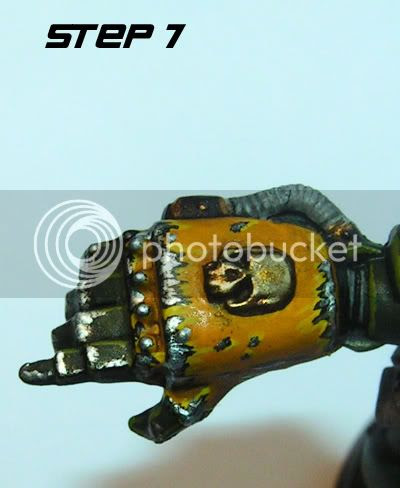 That's it! i hope you enjoyed this short tutorial. If you have any questions please let me know and leave a comment.