In this post I will be blogging about no less then a triple celebration!

First I am proud to announce this is post number 100! yes, 100 posts on my behalf sharing my hobby exploits with the world. This is not a huge number if you consider that I have started this blog about 2,5 years ago but it's still a milestone and worth mentioning. I usually blog about my painting projects rather then gaming and other hobby related subjects so I think it's a good number.

Secondly my local Games Workshop store which is run by a fellow club member was celebrating it's 2nd birthday last weekend. A young and small 1 man shop that I like to visit from time to time was running some competitions on the day. There was a conversion challenge, painting contest, some small games and a free for all kill team battle.

I decided to bring my orks and try my hand in the Kill team battle. The game was hosted by Ian Huxely from GW UK and two other players participated in an improvised battle. Every team started out in a corner of the 4x4 table and had to race to the middle and claim the objective (a downed Stormraven. The other players played orks(30 boyz with two big shootas), Tau(3battlesuits) and Daemons(some nurglings,flamers and plague bearers). I fielded 10 gretchins with a runtherd, three nobs with sluggas and 'eavy armour and three warbikers.
It was an intense game as we agreed that every player had 5 minutes for his complete turn. The store was warm and crowded but it was great fun.
The other Ork player raced to the middle first but was taken apart by all other three players. the Tau player failed his leadership and I was able to roll up the daemons last and won the game. (third celebration) in hindsight it was only fair that i won as i had killed most stuff on the table.

I like the warbikers to take out target from safe distance with twinlinked dakka and get some nice saves, I use the nobz to get stuck in and take out tougher models. The gretchins are merely there to give me a high number of models for low cost. The more models you bring the better since you only have to take leadership tests to stay in the game if you lose more then 50% of your models.

I have found some pictures of the event so I can share some of the joy. 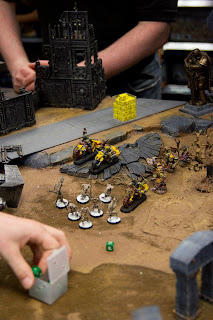 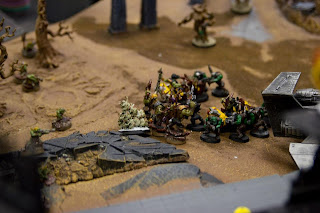