If you are looking to recreate the Battles of the pacific Warlord Games have created some additional scenarios for you to use. More of these will be released later this year in the "Empire in flames" supplement book. Below is a copy of warlord Games' Jungle Road Ambush scenario. Whilst this scenario is tailored for British vs Japanese you can easily replace the Brits with a USMC force from the theatre selector section.Because these scenarios can be hard to find I have posted them here for you.

This scenario, like most Bolt Action scenarios, is designed to be played along the length of a six by four feet gaming surface.

A 6”-wide road stretches from the south table edge to the north table edge, roughly bisecting the table into two equal halves. This road, being not much more than a dirt trail, simply counts as open ground and not as a road.

Place a road block, like a large tree trunk, in the middle of the table – this counts as an obstacle that is impassable to vehicles.

The rest of the table should be covered by a very high density of thick wooded and broken terrain, representing the jungle and rough going surrounding the road. All of the area outside the road counts as rough ground.

This scenario is designed to be played between a British (and Commonwealth!) force and a Japanese force.

The Bristish platoons should be taken from the 1942 – The Fall of Singapore selector in the Armies of Great Britain book. In addition to the choices in the selector, the force may also include one M3 or M3A1 Stuart light tank per platoon.

The Japanese platoons should be taken from the 1942 – The Fall of Singapore selector in the Armies of Imperial Japan book. They may not include vehicles, nor any artillery units except for light anti-tank guns and light howitzers (as the only artillery these small parties could carry had to be broken down and carried by mules along the small jungle paths).

You may of course play this scenario with forces of different nations to represent an ambush on an enemy column anywhere else in WWII. In this case agree or roll a die to randomly determine which force is in ambush and which is being ambushed. If you use vehicles with damage 9+ or higher, these can smash trough the obstacle moving through it at a Run, in which case the obstacle is removed.

Japanese and British units that are not set-up to start with are left in reserve (see Reserves page 119).

At the end of the game calculate which side has won by adding up victory points as follows. If one side scores at least 2 more victory points that the other then that side has won a clear victory. Otherwise the result is deemed too close to call and honours are shared – a draw!

British Reserves can begin rolling to come on the table from turn 1, and do not require an order test to come on to the table. However, they can only come onto the table along the road from the south edge of the table, and only two units per turn can enter the game, all remaining Reserves must be ordered Down.

When Japanese Reserves become available, they come in from anywhere along the west or east edge of the table. 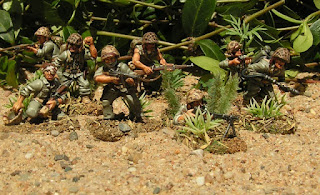 ﻿
A combat engineer (also called field engineer,pioneer or sapper in many armies) is a soldier specialist who performs a variety of contruction and demolition tasks under combat conditions.


In Bolt Action an engineer squad can consist of between 5 and 8 men including the NCO. They are much the same as a normal USMC rifle squad but you can have a smaller unit but have some minor differences in weapons they can have. Unlike a normal rifle squad they can not take 3 BAR’s but can only have 2 instead and no shotguns or pistols.. On the other hand you can take 1 flamethrower for 20 points.  Other then that  there’s not much difference in load out or rules. It seems a bit odd that the point cost of an engineer is slightly higher then a rifleman.
In my army I run a veteran engineer squad. I make them veteran because the unit is only 7 men and it makes them a bit tougher to kill. I have 2 BAR’s and also the pricey flamethrower in it. I have to constantly move aggressively towards my opponents units to get the flamethrower in range (6”) but because of the American special rule  “Fire and manouvre” this isn’t a problem. I think the threat of the flamethrower makes many of my opponents nervous and they start moving units away from the engineers. In this way they disrupt the opponents strategy and this is a great tactic. Granted that if a unit comes within range it’s great to use the flamethrower but most players are smart enough to avoid that.


So is the engineers squad worth taking? I think so but I only take 1 engineer squad and use it to bait or scare units away. 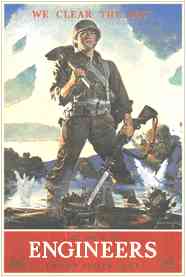 
A Combat Engineer Battalion is a combat engineer battalion of the United States Marine Corps.


The battalion was formed to be a specialized unit to conduct shore party operations during Amphibious assaults, and to provide close combat engineer support to the Marine infantry. The average age of the enlisted men was about 18, and they referred to themselves as "draft dodgers" because all were volunteers.

This is Sarge from Cars. I picked up this kids toy for €2,- and thought I might be able to use him for my USMC Army and now that he's done I'm not dissapointed.

The canopy is a bit off but doesn't bother me. I am going to use him as a transport jeep since he doesn't have a MMG. He also doesn't have an interior but the canopy is made of plastic and comes off easily so if you're a handy hobby man you could convert this model.
I just took off the headset (which was the hard part), filled some gaps with greenstuff and repainted him.

A Willy's jeep can transport up to 3 men so he comes in handy for transporting small weapon teams or a 1st or 2nd LT. Wheeled transports like these are a fast way to get your men where they are most needed.

First picture is the finished Jeep, second picture for size comparison and third pic is the original as I bought it.

﻿
In Bolt Action the 81mm mortar is classed as a medium mortar and counts 3 men in the squad that can upgraded with a spotter adding the fourth member to the gun crew. (which is historically inaccurate as you can read below but hey, it’s just a game)

The rules for mortars are a bit strange, you need to roll a 6  on a D6 for a hit and then a 5 in the next turn if the targeted unit hasn’t moved. Lowering the needed result to hit by 1 each turn. Once a mortar has scored a hit it is ranged in and will only need to roll a 2 to hit in the subsequent turns unless the targeted unit moves. When a unit has moved the result needed to hit is reset to a 6 but there is no clear rule in how much a unit should move so if a unit only moves half an inch the to hit roll is still reset to a 6 which is a bit odd.

You can take three kinds of mortars like any other unit in the game i.e. inexperienced, regular or veteran. Since a mortar fires indirect rounds you do not get the -1 penalty to hit for inexperienced units. The only difference is that an inexperienced unit might suffer from the lower morale to come from reserves and thus delaying to come on the table for 1 or 2 turns if you’re unlucky. The other downside of taking an inexperienced unit instead of a regular or veteran is that they die more easily but since they are usually deployed near the backline they don’t get shot that often other then by forward deployed snipers and the opponent’s mortar. Putting your mortar behind hard cover or out of direct sight works great since you can use the Spotter to mark appropriate targets for the mortar crew they can’t see themselves.

I always opt for the inexperienced mortar crew since the point cost is lower and I always add a spotter. Some Bolt action gamers call this “gamey” or not in line with how the game was intended but the rules are very clear about this. With the inexperienced crew you save a few points in cost but take some risk when it comes to taking (easy) casualties and coming from reserves, the 15 points difference is about right for that I think.

The M1 81mm mortar was the largest weapon in the arsenal of the Marine infantry battalion. It provided the battalion commander with a powerful and flexible indirect fire capability. Four of these weapons were assigned to each battalion, in either the weapons or headquarters company, depending on the table of organization.
Sometimes called "infantry artillery," or "hip pocket artillery," mortars were capable of quickly laying down heavy barrages. These could stop enemy attacks under the worst conditions. Able to fire at high angles, mortars could fire at targets in defilade, either under direction of an forward observer, or firing off map coordinates. In the Pacific campaigns, these weapons became an important part of the battalion's firepower, especially since they could be man-packed into positions that were inaccessible to artillery. 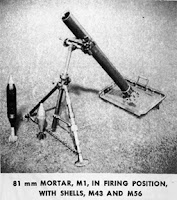 
Several types of ammunition were issued for use with the 81mm mortar. All were fin-stabilized and came as complete units with fuzes already attached. The most common was the M43A1 high explosive round, with a weight of 7.05 lbs and containing 1.22 lbs. of TNT. Equipped with a superquick fuze, this round had a bursting radius of about 30 yards was commonly employed against enemy troops in the open. For dug-in or fortified enemy positions, the M56 high explosive round was available. Weighing 10.77 lbs, and with 4.30 lbs. of TNT, this round could be set for impact detonation, or for a short delay to enable it to penetrate before exploding. When used against troops in the open, it had a bursting radius of about 35-40 yards. Also available was the M57 chemical round. Filled with white phosphorous, this round was used for screening and obscuration and weighed 11.59 lbs.

As an infantry weapon, the M1 mortar could be broken down into three separate loads. These were the barrel, weighing 44.5 lbs, the base plate, weighing 45 lbs, and the bipod, weighing 46.5 lbs. The M4 collimator sight fitted into a bracket on the bipod yoke, providing accurate laying for elevation and deflection. Aiming stakes were supplied in the basic issue items for each mortar, enabling the crew to lay their weapon on target for indirect fire.
Throughout the war and beyond, the four gun configuration remained standard for the platoon, which was split into two section of two tubes each. Two lieutenants were assigned to the platoon. One was the platoon leader and the other the assistant platoon leader. A gunnery sergeant served as the platoon sergeant and the sections were each led by a platoon sergeant. The mortar squad was the basic sub-unit within the 81mm mortar platoon, with a corporal as the squad leader. The following additional Marines were assigned to the squad: one gunner, one assistant gunner, and four or five ammunition bearers.