I'm currently painting up Warlord games' 1/56 plastic Sherman produced by Italeri . You can check the link to get all the details and information. 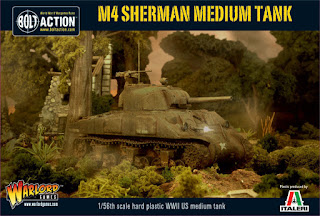 The model fits together seamlessly and has nice details. I used an airbrush to paint on the basic layers of vallejo Brown Violet 70.887 (93) and highlighted it using the modulation technique.

I then added the decals and painted on the damage effects using the stipling technique. Next I will add a streaking effect using oils and then paint the details before I pull out the pigments and varnish.


So far I'm pretty pleased how things are going so I want to get this Sherman finished soon. I'll post some more pics when it's done. 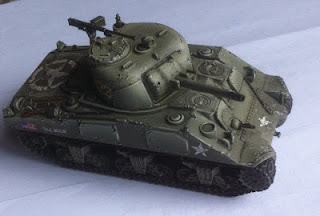 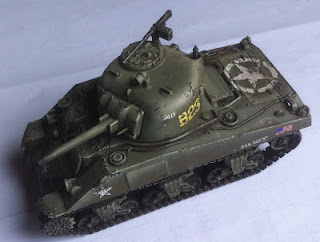 When you're putting a Bolt Action force together it's probably best to start off with a basic 1000 point army upon which you can build and tweak once you get more experienced and played a few games. Here's the list I will use as a jump off point for my USMC. It's a list that can count on it's mobility and firepower. Below I will also explain why I have picked certain units.


-          2nd LT. +1 inf: pretty basic and I usually go with this whatever army I field. Veteran and small team is still hard to kill. Keep the 2nd LT. close to the infantry squads to help them make their morale tests.


-          Medic : Pretty much got that for the cheap extra order dice and might do something, not counting on it though.


-          FAO : Using the American special rule of two airstrikes it’s pretty awesome but I will have to avoid rolling the 1’s. I will try and eliminate enemy armour with it or clumped up groups of units that make a juicy target for the pins.


-          Vet. USMC Infantry squads : Vet's are harder to kill and can take 3 BAR’s, also the American move and shoot rule make this a mobile threat. I added anti-tank grenades to keep my opponent on their toes when they have a lot of armour and since my list lacks anti tank guns.


-          Vet. USMC Engineers : same as the Infantry squads but can only take 2 BAR’s and no anti-tank grenades but added a flamer for threat and flavor. Most opponents fear the flamer.


-          Inexp. Med. Mortar : I field this at the back with the spotter up front in hard cover. They never really get’s pins this way so don't have to take any morale tests and can really threat immobile units like artillery and weapon teams. Cheap to field them as inexperienced and doesn’t affect their to hit roll, needs 6’s anyway.


-          Vet. Sniper : you love them or hate them, they are usually an auto pick for me to take out weapon teams, NCO’s and of course the opponent’s sniper


-          Vet. Bazooka team : It’s a vet small team and threat to enemy armour but I don’t bank on it doing anything other then being a bullet magnet because the opponents usually fear them. That takes the pressure of other units.


-          Vet. M4 Sherman 105mm howitzer : Biggest reason I picked this is because of the medium howitzer that has 2d6 HE shots and Gyro stabiliser and I added a pintle mounted HMG to deal pins to multiple units.


With 10 order dice I will probably be just under average against most opponents as players usually take from 8 to 14 order dice lists in 1000 points games.
So there you go, the first list and a pretty solid base to build upon. If you have any questions, ideas or suggestions please let me know and leave a comment.