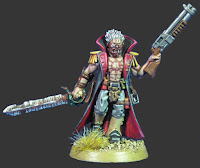 I bought the new 6th edition starter set the day it was released. I bought it mainly because of the mini rulebook that I prefer over the big heavy book. I sold of the dark angels but i couldn't resist the cool new Chaos models. Even though I don't have a Chaos army or plan to start one I just had to paint up the models from this box.
The Chaos Cultists look so cool and are something completely new that I started with those. I still maintain focused on my greenskins but it's nice to paint something else in between projects.

I painted up my first 10 cultists as traitor guard. If you look closely to the models you see they wear Imperial Guard like uniforms with a lot of rag tag cloths. The idea is pretty cool. I imagine these guys being left for dead on some desolated platen full of toxic hazards. After years of struggling to stay alive they have lost their faith in the emperor and have been corrupted to the dark side...CHAOS! 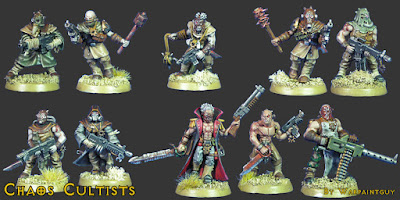 I Hope you like them, let me know what you think. 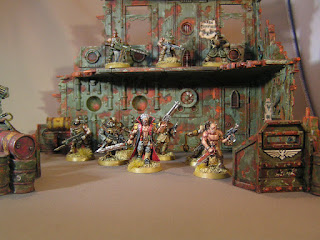 Catching up with the munitorum tape measure

It's been quiet on my Blog for some time now. My last post is from just over two months ago when I went away on Holiday. No updates whatsoever for two months but I did get some projects done. I have been extremely busy with painting, setting up a 40k club campaign and setting up a small scale webshop for wargaming related products. I'm currently finalising things with the webshop so that I can  launch the website in the new year.

Good thing about the posting drought is that I have a good couple of projects finished that I can start posting here on my blog.

So without further ado.....

Here's my Munitorum Tape measure.... A weird thing that GW released a couple of months ago. It comes "pre painted silver" but I think it looks horrible. I decided to get my airbrush out and started painting the thing. In the end I think it looks alright now. 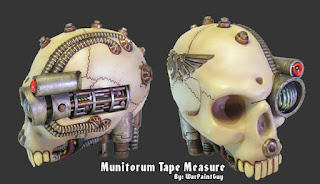