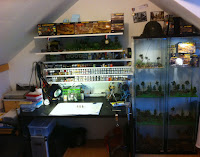 I thought it would be nice to show you, the reader where the physical side of my hobby comes to live. This is my work station. This is where I build and paint the models and scenery. I like to keep everything at arms length so I can just sit down and work. My work station isn’t always as tidy as you see it in the pictures. When I start a new project, say a unit, tank or some bits of scenery I try to start with an empty desk but during the project I tend forget my Clean Desk Policy and there are bottles of paint, glue, sprues, etc, etc everywhere and I end up with a working space of about 12”x 12”. I have bought a lot of different hobby tools over the past 10 years and not in this picture is the mountain of stuff I have accumulated to use one day for a special project, a bit of scenery or just can’t part with.

I currently use two types of paint. I still have a lot of citadel paints from the time I did a lot of Games Workshop but in the past 3 years I have made the transition to Vallejo paints. I have about 100 Citadel pots and about 150 Vallejo bottles I use. I have an airbrush that I use for priming and base coating infantry models, vehicles are painted mostly with the airbrush (Harder & Steenbeck evolution silverline) but I use a normal brush for the details on infantry models.

In these pictures you can see I’m doing a lot of Bolt Action. For the past 3 years I have made a couple of gaming tables, boxes full of scenery and 4 different armies. I have a British, US Marines, Germans and Japanese army and all armies range from 1200 to 3000 points. I have two Ikea Detolf cabinets in which I keep some of my painted models. Not really clear in this picture but at the bottom of the cabinets you can see my 40K Orks, my first love so to speak and they are still very dear to me.

The start of an Imagi-Nation

It was only a couple of months ago when I was at a Dutch wargaming convention called Poldercon that the seed of creating a fictional nation of my own (Imagi-Nation) was planted. I have always been thinking of cool scenarios and rules for wargaming in a modern setting but I just never started writing things down, I didn't even had any modern range miniatures. For the past three years I have been really busy with Bolt Action and promoting it in the Netherlands. I have a few demo tables, a ton of scenery and four different armies but all WW2. Before that I played a few different games and all in all I have been wargaming for nearly ten years.

At Poldercon I was doing another demo for Bolt Action and I got talking with Guy Bowers who was doing a demo game of Black Ops for which he wrote the rules. The game looked fun and eventually I sat down for an hour and let Guy talk me through the rules. Boy it was fun! I went straight to the Stand of Imaginative Miniatures who were also at the convention and were selling the Black Ops rulebook. Of course I asked Guy if he could sign my copy which he did.

In the weeks that followed I started doing some research to see what modern rule sets were available and during my search I also found some blogs about these weird African Imagination countries. Bongolesia, Zugando & Natonga to name a few. I thought this was a wonderful idea, you just make up your own country and regime and throw in some cliche characters with a unique background story and place your wargames in that scene for which you can use multiple rule sets.

Then I also received my copy of the Wargames, Soldiers & Strategy magazine (issue 83) which was all about modern wargaming and even has an article on creating your own Imagi-Nation. This issue came at precisely the right time and I started thinking about my own Nation, I had to think about names, places, characters and a complete story and the more I got into it the more I enjoyed it.

As a result I now have a ton of raw material for stories and scenarios for the following months. A lot of modern 28 miniatures to paint and I have already built a complete Jungle table including mountains, a river, a guerrilla camp and a lot of jungle terrain. I can't wait to get playing and tell you guys all about it.

Make sure you visit Zangali once in a while to keep up with the News, Battle report, scenery building, tutorials and loads more.

Here's a funny picture I don't want to keep from you. Guy Bowers (black ops) and Richard Clarke (Chain of Command Fighting season) were talking about their games. Both telling eachother their games were the best (tongue in cheek). well let's say it was a very amusing hour seeing these guys duke it out and just having fun. Great lads!