I hardly ever put anything from GW directly on my blog but for this special occasion I thought I'd make an exception.It's GW's 40K 25th anniversary so hip hip hoorah! This is the video for the new special collector's edition Crimson Fist model. 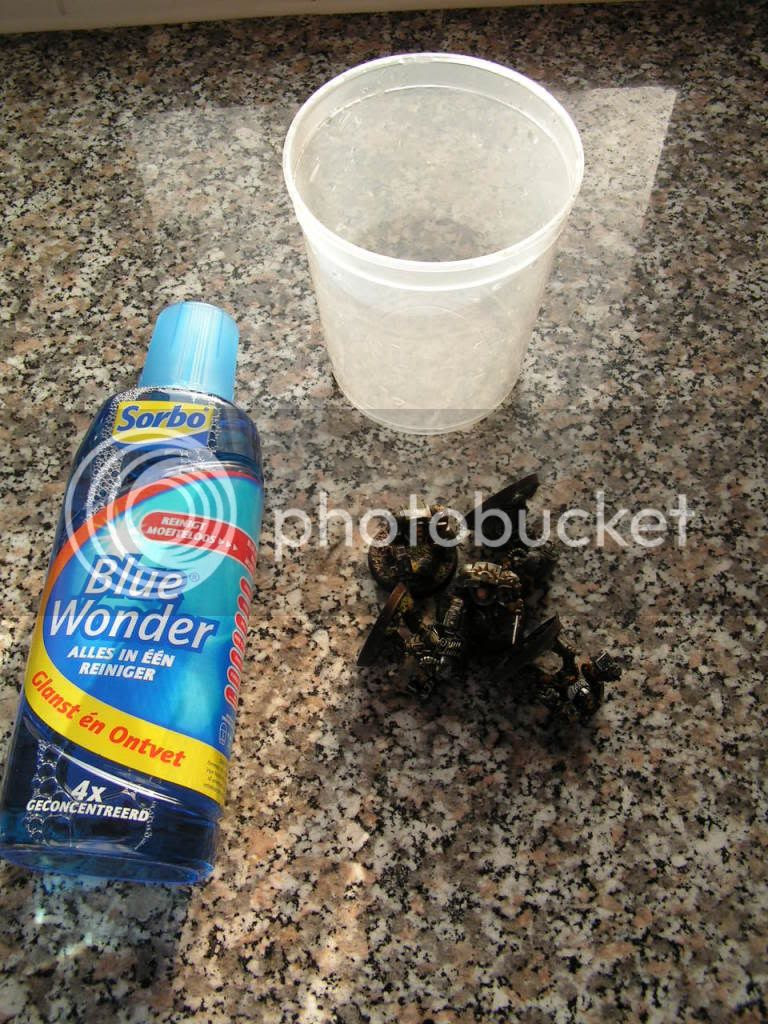 I have been thinking about it a lot and I have been looking on the interwebs for information "how to" do it but now just recently I took the plunge and finally started recycling my painted Space Marines. I have painted up these models about 3 years ago and some of you might have seen my models here on my blog. They look alright but they don´t really `Pop!` on the gaming table. Also I always play them as vanilla marines and I have bought the Blood Angels codex to see what that was all about and now I want my own BA army.

I have plenty of marines to make a good start although some conversion work is needed, the biggest challenge however was that my models are all painted up and I want to strip them of their paint job and get a nice clean model to start over again. On the internet you can find loads of topics on this so I started reading about brake fluid,nailpolish remover and all sorts of cleaning liquids. The problem was most of the named brands weren´t available here in the Netherlands. I did find one topic in dutch on a product I know they sell in my local supermarket, it is called `Blue Wonder`. The name on itself sounds very promising so I bought a bottle and tried it on 5 SM Terminators from the assault on black reach set.

I started off with a test batch and decided my AoBR terminators would be the best to try it on. They have the best armour ,right? no seriously, I think they won't be used much in my future BA lists so I might as well try this product on them and don't have to worry about Melting space marines..

Here is a pic of the "blue Wonder" stuff with all the dutch writing on it. Apparently it will make everything shine and new and will degrease everything, It will clean everything effortless in one go. WOW this is pure gold in a bottle. It also says it is 4x more concentrated. "Concentrated 4x more then what it doesn't say,.... water maybe??

﻿
I just put the terminators in the plastic cup and added just enough of "Blue Wonder" to drown them all. I then let them soak for about 24 hours and got a toothbrush to brush the old paint job off.

And it worked! A lot of the paint did come off effortless and only the layer of primer stayed on the model. Only in some areas where I used foundation paint and where the paint filled in narrow gaps it was a bit harder to get everything off. I put them back in the "Blue Wonder" for another day and then picked off most paint with a toothpick to reveal the smallest details. However not all of the paint cam off but it is certainly good enough to paint over again, just don't expect Golden Daemon level.
Over I rate this product with a 7 because I had to brush quite a bit to get everything off, I didn't get everything off and although it's a cleaning product I didn't like the smell that stayed on my hands for hours after.

Any of you guys have a "Wonder"product of your own then please tell me because I want to try different options.