It's been pretty quiet here recently. I have focussed on painting and modelling this past month instead of blogging. So don't worry, I'm just building up more content for the next few weeks. I got a lot of things done and took a lot of pictures but I just haven't had the time or will to make articles out of it all.

One thing I do want to share with you already is the unit of Ork Boyz. I painted them up like I did the rest of my WAAAGH and I even did an extra Nob as a bonus. 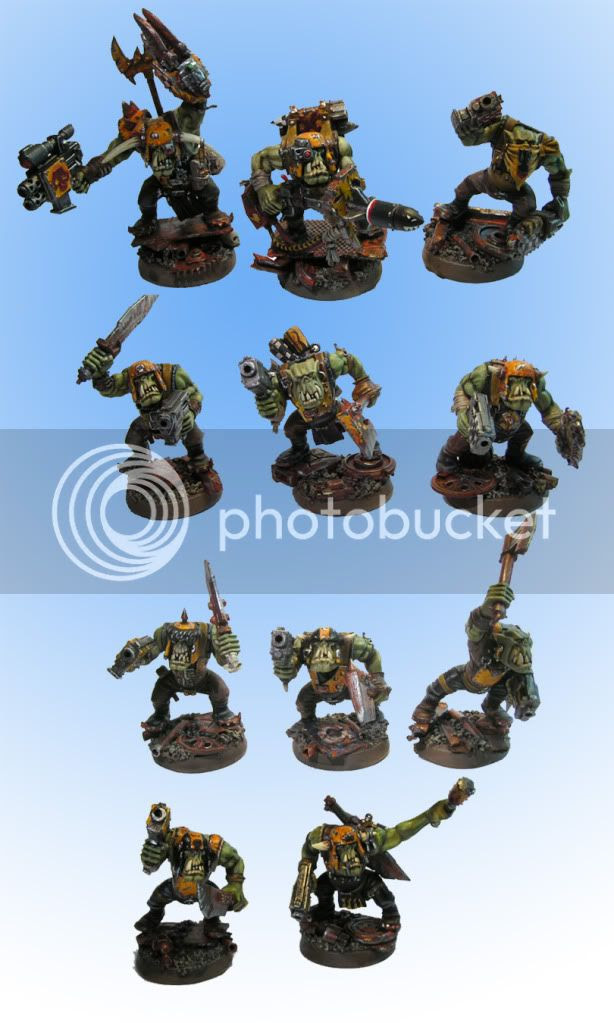 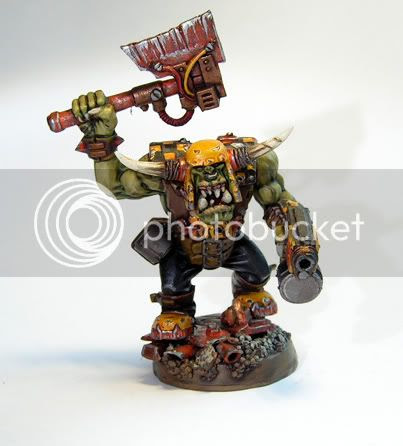 ﻿The planet Belis Alta was once a thriving and prosperous planet but after a vicious attack from a kraken fleet of thousands of tyranid swarms it could now only be classified as a dead world. The tyranids had killed every living thing on the planet and like a swarm of locust moved on to another unfortunate solar system. All that was left were the ruined hives in the middle of vast deserts.

For a dead world there was a lot of noise and racket coming from the ruined manufactorum. Grots scouring for scrap were wildly squealing with pleaasure when they found something they could use. The grots were so busy and imagined themselves safe that they didn't hear the creaky sound of armour tracks that were approaching them. It was only when the imperial Chimera had come to a 100 meters from the old manufactorum that one of the grots happened to look up from his scrapheap and saw the outline of the transport. Immediately he screamed in high pitched tone "HUMIEZ!!!". The rest of the grots looked up and froze at the sight of the imperial Chimera, confused they stood completely still but then fled leaving all their valued collections behind. For creatures with such small legs they were incredibly fast and within a second there wasn't a grot left to be seen.
The Chimera halted it's approach as the top hatch opened. Clouds of dust carried by the hot winds swept over the vehicle obscuring the drivers vision. It couldn't safely get any closer to the ruins without knowing what lied waiting for them ahead. From the vehicle some figures appeared. It was a small inquisitorial force sent out to investigate. A couple of days ago an imperial drone had picked up a scan of some life forms but they were too small to identify. The inq. grey knights came with few but were well prepared to face anyone or anything....This was a simple recon mission, if it were humans they had to be captured, if it was anything else it had to be killed.

In an old and abandoned bunker nearby a pair of red glowing eyes glistened in the dark doorway. The large figure slowly moved out in the open muthering some words:"..pesky... humiez..". Like a troop of awakening wolves some more large Ork Nobz came out of their lair. They gazed at the chimera that was still far away at the far end of the ruin. They stretched their backs and arms wide in the air holding their heavy and rusted weapons high above their head. "Finally sum aktion!" their leader shouted to his companions.One of the slightly smaller Orks reminded the Big Nob that their warboss Skrapsmacka had forbidden any contact with enemies if any presented themselves. In true ork fashion the big Nob punched the smaller ork in the face and ordered the immediate attack.They started running from cover to cover to get as close to the enemy without being seen.They were gloating with the thought of the opportunity to slash their rusty blades through some human spines.

Meanwhile all but one of the grey knights had left the chimera. A grey knight warrior with a meltagun was to stay with the chimera and give the others cover as the others would causiously move through the ruins. These humans showed no fear and even when they eventually saw the ork Nobz only meters away instead of looking for cover they kept advancing but spread out.

Two of the crusaders with an agro flagelant went wide close to the edge of the ruin whist the other crusader advanced though the middle accompanied by 2 Death Cult Assassins and an agro flagelant, the warrior in the chimera remained in possition overlooking the site. The dust winds made it hard for him to see what happened in the ruins and all the chimera's shots  missed their targets as they could only see them for a split second.

The Ork Nobz were confused when they realised that their opponents seemed unfaced by them. Maybe it was because of that then when the two forces colided that the first nob was slew with ease. When his body fell to the ground the other Orks went crazy and with furious anger they hacked away at their opponents. Although the grey knights seemed without fear they were no match for the primal power of the orks. One by one they were slaughtered in close combat. The grots that had been hiding in the ruins saw with great pleasure that the grey knights were no match for the Nobz. Their eyes started glowing bright red with excitement and they hastely came from their hiding places. Cowardly they singled out one of the last two remaining crusaders and raised their blasta's at him. The grey knight crusader stared down at the vile green grots, this was not how a noble grey knight should die. Nevertheless, before he could react the grots unleashed a hail of bullets from a save distance and the crusader was struck down. When he fell to his knees, blood spilling from his mouth he held his hands to his chest. Quickly his dark red blood was spilling through his fingers and he fell over, dead!. The grots screamed for joy and hopped from one leg to the other when they realised that they had managed to kill the mighty crusader. The only remaining crusader saw that all was lost and tried to get back to the chimera.

When he was only 10 meters away from the chimera he could finaly see his transport through the clouds of whirling dust. He smirked and then tried to warn those who stood there waiting for him. "QUICKLY, FALL BACK! THIS PLACE IS ........ARGHHH!"... The crusader stopped running and his legs caried him a few more steps before he fell down with his face in the sand. A huge axe was sticking out from his back. The warrior tried to look through the dust to see what had thrown the axe but he saw nothing. A second later he jumped in the chimera and shouted at the driver to head for the extraction point as fast as possible.

Back on the battle barge the surviving warrior was immediately summoned to the comms room for debriefing. All he could tell his superiors was the confirmed sighting of grots, nothing else. The commander fumed with anger and sent out a high altitude drone to the site that had been appointed by the Chimera driver. The recon footage showed nothing, no enemies, no bodies ,nothing. Could this have been simple feral orks and grots or was it something else, something bigger, something more dangerous? What could live on a dead world like Belis Alta, it was a planet of no importance whatsoever so surely no organised enemy force would risk living there. It was nothing like it's neighbouring dead world planet "Belis Corona" other then it's harsh climat.
This was an actual 200 points Kill Team game that was turned into a battle report/story by myself. The fluff of my "Boyz" will largely be based on further battles I play and some background and history in between.  This is a very fun way to get a real feel and connection with the army I'm building.
Posted by BaBuGames at 7/05/2011 12:30:00 am 2 comments:

OMG OMG !!! I really can't believe how fast May has come and gone. It almost seems as if i was hibernating and the whole month went by me.

So what have I been up to last month?
- Well I painted up a small number of Orks for my Tale of 4 gamers challenge. I painted a bit of a mixed bag, 1 Killa can, 4 Boyz and 4 Grotz. I have to admit that because I had spent almost 3 weeks on painting the killa kan I had to opt for the easy way out and quickly painted some smaller models so I could achieve my target for May.

This might need some explaining. 3 other gamers and me set up a "tale of four gamers" challenge in which we have to paint 10 points every month. We broke down the models into different brackets because for example 1 guy is painting Grey knights and I'm doing Orks. If we would use the points for units I would have to paint about 40 boyz whilst the Grey Knight player only has to paint 10. We broke down the models like this:

This way every player has to invest about the same amount of time every month to reach their targets.


I have also fielded my greenskins in a couple of 200pnt Kill Team games. I came out on top vs the Grey knights but the dark Eldar were too fast for me and almost tabled me. I also had a game vs Nids and lost that to.

As part of our "To4G"challenge I also had to write a battle report on my game vs the grey knights.I will be using that batrep as a prologue for my Fluff and I'm thinking of posting it hare too but writing in English isn't my strong point.

Anything else happened in June?
Yes, I bought my first finecast model, Another lovely greenskin. I'm not telling which model yet because I'm saving it up for next month when I'm doing a "special" on him and his unit.More later...

So what's in store for this month?
Well, I have to paint up more Boyz but I've started well. I'm painting them in an assembly line fashion now and things are going faster. I have good hope I'll finish my 10 Boyz + nob well before the end of this month so I can start on some ork Kommandos as a treat for myself.
Posted by BaBuGames at 7/04/2011 03:59:00 pm 1 comment: