Some time ago I finished these Ork Kommandos but I never got round to post them on my blog.
I painted them in Desert camo and some yellow bits to tie them into my Bad Moons army.

They are not the most reliable unit in the Ork range but they certainly are a lot of fun to use in games.
The ability to surprise your opponent with a small unit of cunning Orks behind their battle lines is priceless. I have 4 normal boys, 2 burnas and a nob with a powerklaw. If you position them right you can get quite a few kills the turn the come on the table by using the burnas and the burnas also help if they get charged. The unit is quite small but it faces the opponent with a problem, deal with them now or let them roam free. usually my opponents try to get rid of them asap which is good because my other units are more likely to close in on the enemy.

What better way to get back into painting again then to see your work featured on the Games Workshop Website. Last summer when the Ork Flyer was just released I jumped on it immediately and after two weeks of frantic painting I finished the model and posted it here on my blog and on Coolminiornot. (you can find lots more cool pics of my plane on that page)

Very soon after that I was contacted by GW staff and they asked if I had bigger and better pictures of my bomber. I was chuffed that they wanted to post my work on their site and mailed them the original pictures. I got a nice e-mail back and they asked me if I could explain how I painted it so I sent them another mail with all the information.
I was curious to know what they wanted to use the pictures for and they said they would probably feature my flyer in a White Dwarf Daily post. For the next few weeks I checked the site daily but no yellow flyer was to be seen...

Until yesterday when I was playing a game and my opponent said that he had seen the exact same plane on GW's website and so I stated digging back through the posts and what do you know...

They used my plane to promote the recently released 40k aerial Compendium, Death from the Skies...

It's cool to see your work featured on the GW website and it's the first time for me. I hope to get more stuff featured so I'm eager to get back to the desk and go the extra mile on my new projects.

Here's the link to the article on GW.com

And here's my Flyer with information. 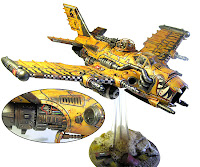 Seb Burlage sent us this grinning Blitza-bommer, which he painted in the colours of the Bad Moons clan. The gaping Squig mouth painted on the fuselage was inspired by the Deff Skwadron graphic novel. The smooth yellow is a mix of Averland Sunset and Yriel Yellow, which was applied using an airbrush. Seb then painted in the black panel lines using Abaddon Black watered down with Lahmian Medium. Several thinned-down washes of Agrax Earthshade give the plane an oily, weathered appearance. Seb then took a small piece of sponge and gently dabbed Doombull Brown on to the areas that would see heavy wear and tear such as the air intake and the fronts of the wings.